I am riding again in Pelotonia and am once again asking for your support. I have shared my story the past 4 years, telling you about my uncle (Patrick, 12/16) that lost an extremely difficult battle with NSCLC and other stories of my aunts  (Kathy, 11/15 and Trisha, 5/17) who lost their battles with breast cancer and even my uncle’s father’s death (James, 5/04) with lung cancer.

This year is hits even closer to home, if that’s possible.  A few weeks prior to the ride in 2019, my father, Dennis Slattery, was diagnosed with NSCLC.  The morning of the Pelotonia ride, he collapsed in my driveway and was taken via ambulance to The James.  It was there that the remainder of his testing was completed, and we received the devastating news – Stage 4.  In his hip, his shoulder, his ribs and his liver.  He kept up his spirits and his surly attitude though – asking if we would refund his donations to our Pelotonia rides since we were too busy sitting with him at the hospital instead of participating in the ride…

He went on to complete 3 rounds of immunotherapy from 8/26 through 11/4.  While it didn’t have the same side effects as chemo, it didn’t come without its own challenges.  He developed fluid on his lungs, putting immense strain on his already weak heart.  Even with multiple thoracenteses, the strain was too much and on November 10th, his heart gave out.  At the time of his passing, his cancer was more than 50% smaller – majority of the metastasis sites and lymph nodes on the right lung clear.  The treatment was working.  And it was done at The James – the recipient of every dollar raised by Pelotonia.

My family and all of its riders have raised over $28,000!  This year, we ride again for our family, for our Dad / Papa / Uncle D, but also for every other family that has ever suffered the tremendous loss, grief and suffering that ours has.  We ride to end cancer.

Please donate to help further the very needed research to find a cure for cancer.  No donation is too small in this huge battle so many face each day. 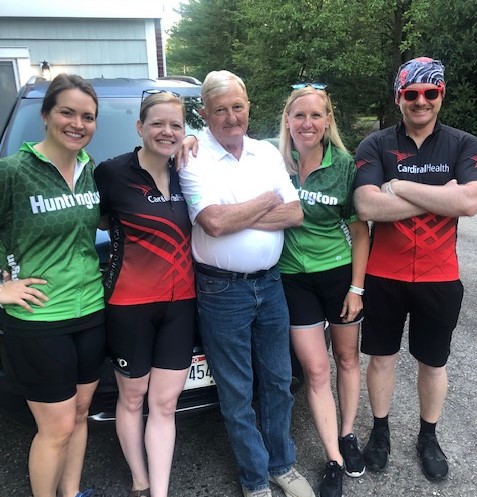