My Peloton:
Midnight Train From Georgia

It's our sixth year of riding in Pelotonia and we're back for another 180 miles. Between November 2012 and April 2013, we lost Aunt Judy and her daughter, the best-cousin-ever Susan, to cancer.  Susan was 42 years old, but she lived with such passion and curiosity that the world lost a million lifetimes. If I can do anything to help people avoid such loss and suffering, I'm in. So that others might not have to know the pain of loss. The pain of illness.

This past June, we lost my dad as he suffered from the effects of chemotherapy and complications associated with his cancer diagnosis. Cancer didn't kill him directly, but it absolutely contributed to his end.

I am grateful that I am here. That I can do something.

Together, we can make a real difference in the battle against cancer. I ride for all of us.

PS: Read more about why I ride on my Medium site, and stay tuned for more entries as we train. 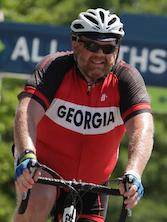