Living in central Ohio, I have watched Pelotonia grow, and thought about getting involved. It wasn't until I almost lost my dad to this incideous beast in 2016 that I made a commitment to myself that I would get involved.

I ride for many in my family who have been waylaid by this monster. Closest to me is my dad. Years ago he was diagnosed with bladder cancer. It was found early and remission came easy, thank God! In 2014 he was diagnosed with throat cancer and underwent radiation/chemotherapy. As he lost his hair; we, my brothers and I, watched his fight flounder, we all shaved our heads in a show of support and solidarity. They thought he had won his 2nd cancer battle. Unfortunately this was not to be. Dad passed away the morning of Dec 10, 2016.

... my cousin, Chantelle Baker-Ortiz who has almost shared my birthday for our entire lives. She is a special woman who has been diagnosed with Lymphoma and is currently in remission. She is entirely too young to have a life expentancy of 10-20 years. Her kids need their mama. Her grandkids need their grandma.

... my aunt, Denise Scott. Her breast cancer is in remission for the 2nd time.

... my aunt, Jan Moore whose utrine cancer is in remission.

... my aunt, Betsy Calsin whose breast cancer is in remission.

... my aunt, Tracee Wyss-Neal whose colon cancer is in remission.

... my aunt, Sandy Hastie. 20 years ago, her uteran cancer was found just in the nick of time. She was cancer free over 20 years. Unfortunately, in the summer of 2018 she was diagnosed with lung cancer and passed away Dec 15, 2018.

... my grandad, Fred Moore, who passed in 1989. Prostate cancer hit him near the end of his life.

Please help me support the tremendous work being done to battle cancer at The James Cancer Hospital and Solove Research Institute. 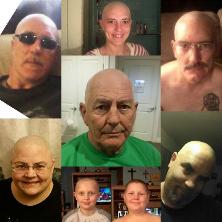