Now more than ever the need for cancer research funding is vital. During this pandemic, individuals are still being diagnosed with cancer. It’s up to us as a community to continue to fund ground-breaking research in order to not slow progress toward our One Goal.

100% of every dollar you donate is invested in innovative cancer research, the brightest minds and ideas, and the tools and technology needed to change the future of cancer care. In just twelve years, the Pelotonia community has raised more than $209 million, but we aren’t stopping there. Please consider supporting me today by making a donation. Together, we can be legendary.

I am dedicating this 100-mile ride and marathon to my Grandpa Tom.

He passed away in 2001 from pancreatic cancer and I never got to know him as well as I would have liked to. He passed away in early 2001 after knowing he had cancer for only a month. He was suffering from chronic back pain and the doctors were adamant that was what needed to be fixed. However, when he went in for back surgery in late 2000 they discovered that pancreatic cancer was the root cause of his pain, and it was at such a late stage that it had started to eat away part of his spine. A month later, he passed away.

I hope the money I raise for Pelotonia goes towards research that explores cancer prevention techniques, develops methods that would have detected Grandpa Tom’s cancer earlier, and ultimately finds a cure for the disease. 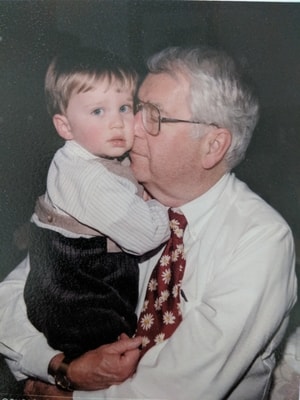