Team Buckeye is the official super-peloton of The Ohio State University. It brings Buckeye Nation together to ride in Pelotonia, a grassroots bicycling event to raise money for cancer research at Ohio State.

No team in Pelotonia is closer to the reason we all ride. One hundred percent of the money raised by Pelotonia directly benefits Ohio State’s Comprehensive Cancer Center – James Cancer Hospital and Solove Research Institute. It’s a great way to embrace Buckeye pride and be a part of the university’s single largest fundraiser.

Team Buckeye encompasses all pelotons created by Ohio State students, faculty, staff and alumni, and can include their families and friends.

Team Buckeye brings Buckeyes together as one large team with one goal: end cancer.

Donate To Our Super Peloton 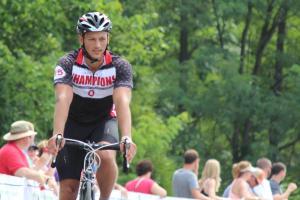